Advanced Nurturing High School (, Kōdo Ikusei Kōtō Gakkō), also known as Tokyo Metropolitan Advanced Nurturing High School (, Tōkyōto Kōdo Ikusei Kōtō Gakkō) in the anime, is a school established by the Japanese government to nurture the young people who will support the country in the future. It boasts a 100% employment and college entry rate, and with thorough, state-directed teaching methods, it spares no effort in pursuing the nation's desired future. [1] The area of the campus based on the light novel, is about 600,000 square meters. [2] 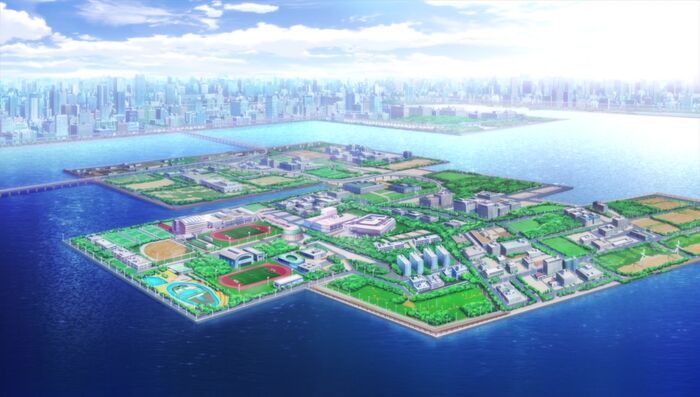 School is said to have established fine details regarding the rules for the usage of private points by the students but the teachers are forbidden to disclose the finer details to their students.[3]

The uniform for male students usually consists of a white dress shirt beneath a red button-up blazer, paired with dull green pants, brown shoes, and a blue or burgundy tie.

Female students wear a similar uniform, consisting of a white dress shirt and a red button-up blazer, along with a short white skirt, black socks that vary from calf-length to thigh-length, brown shoes, and a blue or burgundy bow-tie.

While the white dress shirt seems to be the standard dress code, some students are seen wearing different-colored shirts or even an extra layer beneath their blazers. For example, Kei Karuizawa wears a light blue shirt while Mio Ibuki and Haruka Hasebe each wear an additional orange shirt under their respective blazers.

Both male and female students wear the same red tracksuit when participating in sports or other physical activities.

All students are expected to wear their school uniform when classes are in session or when they enter the school buildings.[3]

The main characters, Kiyotaka Ayanokōji (who resides at Room 401), Suzune Horikita, and Kikyō Kushida, reside in one of the four building units that are used for dormitory purposes. Each of the units is a 15-storey building comprised of not less than 140 rooms that are individually divided among students. [1][4][5][9] The first seven floors above the ground floor are dedicated to male students while the upper seven floors are for the female students. [5] Boys are technically not allowed to enter the area where the girls live after 8pm. [11] These buildings are arrayed by a pair of elevators, and possibly a section where the fire exit is positioned. [5][6]

Additionally, each room in each building is designed to be as minimal as possible and is enough for a student's survival. [1][9] According to Kiyotaka's estimate, the room is about 8 tatami mats big, thus, 13.2496 m2 in area. [2] It is known to have its distinctive security passcode which is accessible through duplicate green cards. [5] It is also known to be equipped with an internal telephone line system that is available all the time for all those that are residing in this area. [4]

The dormitory is known to be near to public spheres such as the park and boulevard. [5] Details about the head manor and dorm staff are yet to be revealed in the series.

Every classroom is equipped with a whiteboard, TV-screens, lockers, and fixed 25 student tables, whereas, in the light novels, it can vary based on the number of students in-field. Surveillance cameras are also present in this area. [1]

The main function of this area is to provide a standard meal to students with the exchange of private points. [4] The meals are priced with great diversity which is directly proportional to the taste they offer. [4] This area is also known to be under the surveillance of cameras. [1][4]

This room is made for activities related to the Student Council's duties such as for holding a regular special meeting with leaders of successful classes for each year level and for management of local student affairs. [4][6][7] This room has a big U-shaped table with comfy seats. [7] It is also known to be equipped with a projector and automatic window blinders. [7] This area is revealed to be somewhere near the school's swimming pool. [4]

This is an airconditioned area that is specially made for book archiving and referencing. [4] Other kinds of student activities such as group study and meeting are also allowed in the area. [4]

Details about the librarian and the library staff are yet to be revealed in the series.

It is also noted that the architectural structure of this building is somehow patterned to Akita International University's Nakajima Memorial Library.

This multi-purpose area is where the annual opening ceremonies and club fair are being conducted. [1] It is also used by the Basketball Club for their regular evening training. [4]

This area is a 5-story main mall complex of Advanced Nurturing High School.

In the anime, this area is inside the Keyaki Mall. [7] However, in the light novel, this area is located on the first floor of the school building. It is a well-known cafe among the female where they not only can buy drinks and beverages but also study and meet up for secular reasons. [1]

This area is inside the Keyaki Mall, the main mall complex of Advanced Nurturing High School. [7] It is an electronic store that offers various kind of services; one of which is for electronic device warranty repair. [7] This is where Airi Sakura, with the presence of Kiyotaka Ayanokōji and Kikyō Kushida, brought her camera in order for it to be fixed. [7]

So far, the only known employee of this store is Yukitsu Kusuda, who is now in custody of the police due to his attempted assault against Airi Sakura. [7][8]

This area is inside the Keyaki Mall, the main mall complex of Advanced Nurturing High School. [6] Aside from offering rooms for disco and karaoke, alcohol and exquisite beverages are also being served here. [6] This location is often visited by Class 1-C students and some 1-D students. [6]

Within the confines of Advanced Nurturing High School, most of the areas in the public sphere are under the surveillance of cameras. [1][4][8] There's also an active group of police that regularly patrols the area. [8]

This circular area is comprised of several benches on its perimeter with each of them facing the fountain at its center. [4][5][6]

It is a non-surveillance area composed of a pathway made of bricks, a considerable number of street lights, and an iron fence that separates the landform to the sea. [5][6]

It is later revealed that only the graduating students of Class A will receive the university and employment recommendation by the school.

Community content is available under CC-BY-SA unless otherwise noted.